A beach ball is one of the most famous playing tools you can see on the beach or anywhere else where water games are there. It can be used for a number of water fun games. Moreover, it is used by all age groups, let it be an infant, a youngster or a grown up due to its great versatility. It is usually an inflatable ball made of really light weight material. Their light weight and size utilize minimal effort to be propelled. It can further be involved in a number of playful and recreational purposes. It is also really suitable to be used due to its light weight and workability to be held and caught easily without harming oneself or anyone else. 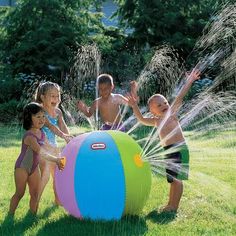 Jonathan DeLonge of California is generally believed to be the inventor of Beach ball. The size of a beach ball largely varies from as small as to be held by a single hand to up to 3 feet in diameter. It is generally composed of light plastic panels attached together along with two circular panels fixed at two respective ends opposite to each other. One of these circular panels comes fixed with an inflation valve which is designed to inflate the ball with mouth or through a pump.

Beach balls are much cheaper than the balls used in other professional sports. However, they can be involved in recreationally plating games such as volleyball. They are hit on and bounced around playfully in crowds in concerts, games or other gatherings too. Moreover, due to their property to float on water, beach balls are generally thrown on swimming pool, especially kids’ pool so that people can play with them and have fun. You can also indulge yourself with fun games at parties with beach balls. You can ask two participants to hold the beach ball between their noses without dropping it and so on.